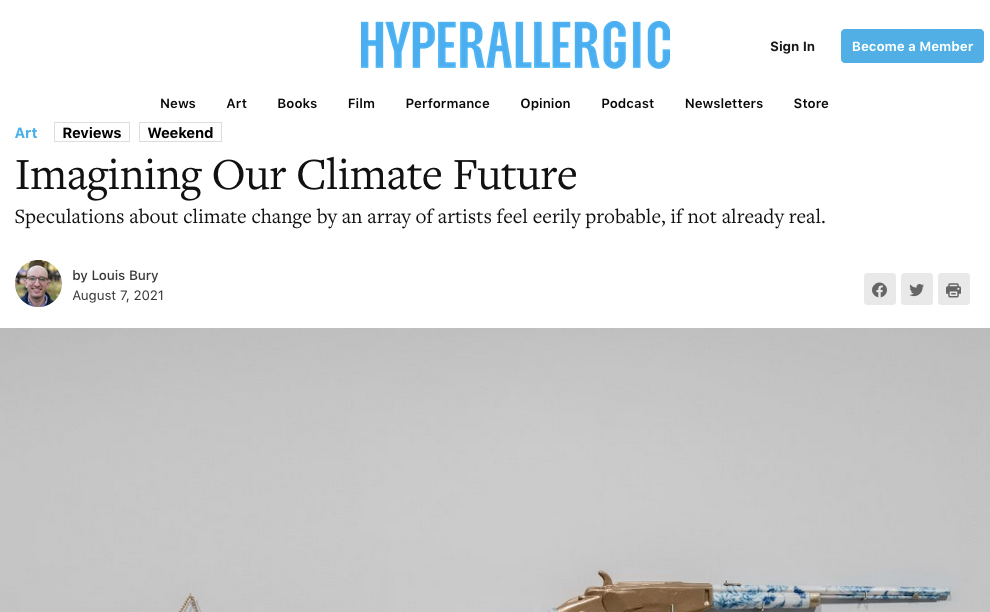 Imagining Our Climate Future
Speculations about climate change by an array of artists feel eerily probable, if not already real.

Between heat waves, wildfires, and melting glaciers, all of which set alarming records each year, lately it feels hard to imagine a climate future that isn’t dystopian. Yet Collaborative Survival — a small but ambitious group exhibition at 601 Artspace that takes its title from a concept in Anna Tsing’s paradigm-shifting work of anthropology, The Mushroom at the End of the World — sets out to do just that. However, what emerges most clearly, through several worldbuilding projects, is a sense of visual art’s strengths and limitations when it comes to imagining potential climate futures.

Of the exhibition’s artworks, Beatrice Glow’s mock-luxe multimedia installation Smoke Trails (2021) creates the most developed world. Set in the year 2068, the project imagines the fictional estate sale of a quadrillionaire family, nicknamed the “Empire of Smoke,” that made its fortune in the tobacco and arms industries. The ornate, faux-porcelain and -gold objects — from pipes to rifles, to vape pens — have been 3D printed and displayed on a gallery wall, and are also displayed in a VR-generated video tour of the dynastic family’s mansion. But Smoke Trails achieves its most complete expression in the published “mocktion” catalogue, “The Collection of the EoS10^15” (2021), produced by Glow and Jeong-A Kim.

The 100-page-long auction catalogue stands out not only because the form lends itself well to satire (for example, a vape pen prototype is extolled for its rarity in the year 2068) but also because books provide ample room for what fiction writers and game designers call worldbuilding. Worldbuilding is particularly important for genres such as sci-fi and fantasy, in which the fictional universe differs substantially from the actual one, but, whatever the genre, elements such as character, folklore, and setting provide the story with coherence and depth. Broadly speaking, there are two types of worldbuilding design: top-down, which begins with a thorough, big picture schema and fills in details from there; and bottom-up, which begins with relevant details and only sketches out the big picture as needed.

Likewise, Goldie Poblador’s Fertility Flowers (2021) and Michael Wang’s Extinct in the Wild (Brugmansia versicolor) (2021) both favor sensorial presence over discursive exposition. Poblador’s irresistible handblown glass miniatures  — spidery amalgams of human and biomorphic forms, kissed with vegetal tints of color — reimagine the Dama de Noche and Peacock flowers, both native to the artist’s home country of the Philippines, from a decolonial, ecofeminist perspective. Wang’s blocky, translucent greenhouse contains five Brugmansia versicolor plants that no longer exist in the wild but that grow here in a controlled artistic environment. As with the laboratory apparatuses in HyperAdaptation, the component parts of Fertility Flowers and Extinct in the Wild (the individual sculptures and plants, respectively) aren’t given titles, suggesting that their identity is subordinate to the larger whole.

The simple takeaway from these varieties of worldbuilding is that less is often more when it comes to elaborate curatorial and artistic conceits. While Collaborative Survival’s artworks are each compelling in their own right, in aggregate their intricacies make it hard for the exhibition’s promising ideas about dystopia to come into focus. The artworks themselves evidence a similar dynamic, with the bottom-up installations asking less of the viewer and giving back more. The top-down approach seems to work best in forms that are more conducive to exposition, such as books and Role Playing games.

However, two concurrent climate-minded exhibitions at Smack Mellon — Tammy Nguyen’s Freehold and Shayok Mukhopadhyay’s Waiting for Water — provide further perspective on top-down artistic worldbuilding. Freehold incorporates dazzling paintings of dense forest foliage and shimmering collages of words and iconography, as well as a placid city flag, in order to counter-mythologize the Malaysian island of Forest City, which is a tax-free, human-made refuge that imagines itself to be a futuristic eco-utopia. Though the exhibition utilizes a top-down model — in which Forest City has been reimagined as a steady-state economy, immune to the effects of climate change — the meticulously rendered and ravishingly detailed artworks don’t elaborate on this idea in a systematic way. Instead, cumulatively they create a beguiling, wary mood that conveys, with pointed irony, a perfectionist artist’s distrust of vacuum-sealed perfection.

Waiting for Water, on the other hand, illustrates how top-down design can determine, in good and bad ways, how the artwork gets realized. The installation’s primary concept is that a water crisis has hit New York City in the not-too-distant future, represented by various makeshift containers installed along a gallery wall as stand ins for their human owners waiting in line for the scarce resource. The secondary concept is that plastic water containers have been put on museological display, also in the future, represented by a parallel line of pedestals, upon which stand colorful plastic vessels shaped like fragments of classical terracotta jugs, each with a terse descriptive label. It would be hard to overstate the brilliance of the latter conceit — whose biting museum form confronts viewers with the plastic remains that will constitute part of our era’s disturbing archaeological legacy — but, as realized, it feels underdeveloped because it’s too disjointed from the rest of the installation.

In the way Waiting for Water imagines future worlds that look an awful lot like the present one (the installation is modeled in part on imagery from the 2019 Chennai water crisis), it also illustrates climate worldbuilding’s complicated relation to the categories of fact and fiction, business-as-usual and apocalypse. All worldbuilding, even that of the most improbable sci-fi and fantasy universes, incorporates elements of the actual with the imaginary. But in much climate speculation, the imaginary elements can feel eerily probable, if not already real. From the obscene accumulation of private wealth to plants that can only survive with human care, to circumspect glimpses of an island paradise, these recent climate-related artistic imaginings aren’t far-fetched apocalyptic fantasies but tweaky versions of the compounding crises — past, present, and future — that our species navigates the way fish do water.