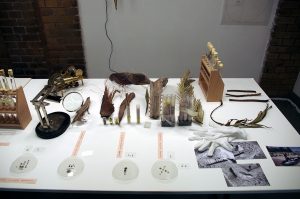 Chronicle of a Place

Chronicle of a place

“Chronicle of a Place”, 2013-2015 is a performance and installations project in public spaces in New York, Istanbul and Tel Aviv. In the framework of this researchbased, time and sitespecific project Jenny Brockmann embarked on paths which are related to the history of German emigrants in these cities [1].

In New York the artist went on the tidal East River with a small motorized rubber boat, in Istanbul she took a straight line (passing through houses and upon the water) from the Sirkeci station to the Galata tower urban landmark and in TelAviv Brockmann spent three hours time in public space at nine stations on a spiral-shaped route.

In her studio in Berlin the artist analyzed my collection, working on maps, photocollages and films, assorting and cataloguing the material samples. For each place a diary related site description emerged, constituted by the different media. On every place, where these materials will be shown, Brockmann will continue to take measurements in order to proceed to work on an evergrowing archive.

[1] This projects relates to the question of identity and home in view of the situations of closing the borders around Europe and the rising numbers of refugees from Africa and the Middle East asking for asylum. Brockmann researched about the emigration of Germans in the recent history. In the beginning of the 20th century Germans emigrated to New York because of financial and of political reasons. 150 years ago german engineers and workers emigrated to Istanbul to work in the many infrastructure projects, and German jews emigrated in the 40’s to Tel Aviv because of the Holocaust in the second World War.