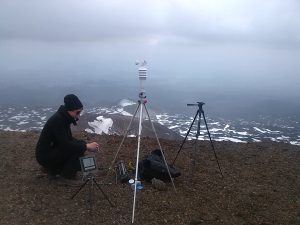 Jenny Brockmann is working on a series called “Parallel Line Up” (drawing, photography, film, performance, sculpture) since 2012. She started selecting stones like Lambporphyr or Hohwald granite in local quarries and working on sculptures that were dynamically linked to the temperature of their surroundings. In 2014 Brockmann exhibited a stone sculpture (Stone, H0,6m x 3m x 3m, 2014) at the German Consulate in New York, whose stones come from a quarry near Dresden, and were lifted and lowered by an air cushion, in accordance to the temperature in Berlin. Other sculptures like “M 00012-02-05” (H60cm x T25cm x B40cm, Lambporphyr (granite), steel cable, motor, 2014, see picture) move according to Central European time intervals or open up at dawn and close at dusk. These works deal with the idea of location and dislocation of objects and material and how data is used and interpreted in our present time [1].

Brockmann collected herself data (weather data, material, drawings, notes) and documented the places where data come from: meteorological stations, geological observation centers, volcanic observatories. Brockmann is working currently with rocks of volcanic provenience, connecting them with the seismic data from their origin place.

[1] It is a crucial fact in present time that things are removed from their original locations to be added to a different location. Michel Foucault has described this in his essay “Heretopias”. A second essential characteristic of our time is the amount of data with which we are surrounded from all parts of the world that affect our daily lives.