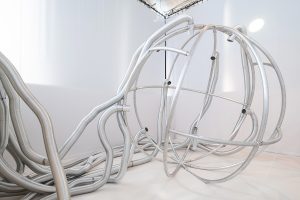 In her installations which often develop their full potential through the actions of the visitors, Jenny Brockmann integrates devices and methods which are frequently used in scientific research. In her new project «Cold – Study of Sensitivity», the artist has developed a room of sensory experience for one person at a time. The room invites the visitor to become better acquainted with his/her own sensitivity and sensibility to process of cold (and heat). It also allows one to reflect on the psychological effects of cold. For cold is not merely a meteorological Uraufführung 107 phenomenon; it can also describe the social condition of being disconnected and distant – a trend that increasingly poses a challenge to our coexistence. With this work, Brockmann continues a project she began at the Kunstfest 2018, highlighting the work of Gertrud Grunow who gave instruction on attentiveness, harmonisation and balance at the early Bauhaus in Weimar. With her project, Jenny Brockmann places the Bauhaus at the centre of current social debates on climate change which are no longer separable from the notion of achieving a harmonious coexistence, and for which she now proposes a training programme for our own sensitivity. Most people nowadays are increasingly uncertain about nature and technology, what they have in common and what they don’t, what they are and what they aren’t. Humans and their technical surroundings are inextricably interwoven and often even coalesce. We interact more and more every day with technical devices and systems. Since the Bauhaus and especially since the beginning of the 21st century, we are finding it harder to answer the question of what nature is. While scholars in the 1920s described the strengthening ties between humans and technology in more aesthetic-visionary terms, today in the age of digitalisation it has become clearer than ever how interconnected we are with technology and how impossible it has become to sever those ties. If everything is design, then what is nature?
The project «Apparatus of Heat and Cold – Bauhaus Attempting Balance» has been investigating the historical Bauhaus in Weimar and its impact on contemporary art and culture in various exhibitions, a publication and discussion forums since 2018. This year, the project curators have invited four internationally known artists and artist collectives to explore the uncertainties and potentials arising from humantechnical existence, and by extension, the cultural and intellectual temperatures and concept of nature at the Bauhaus. While the events in 2018 focused on heat and cold in relation to Bauhaus colours and colour theory, form-building and design, and balances and imbalances in their diverse aesthetic and social facets, this year’s project applies heat and cold to the understanding of nature at the Bauhaus.