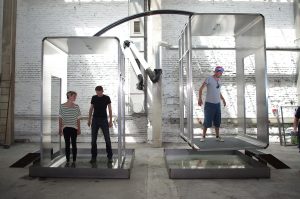 The series “Rooms” consists of rooms in different materials and sizes, which depict a series of experiments dealing with spatial perception [1].

“Alignment” (H3m x B7m x T7m, wood, steel, control, motors, 2011) consists of three circular rooms in different scale which are located one inside the other. The walls of the rooms are fabricated in wood, and have three doors each. Depending on the movement of the people through the space the doors open and close.

“Out of balance” (x H4m B6m x T2,5m, aluminum, steel, water, EKG, 2012) consists of two rooms hanging in balance, like an oversized scale. The installation must be entered by two persons at a time and it reacts to the weight transfer of the visitors.

“Roundel” (H3m x B10m x T10m, steel, canvas, stone, motor, 2000) is a large, circular canvas, which the viewer can experience from the inside passing through two convex openings. The canvas is surrounded by chairs made of stone and steel. In all these installations, the common element is that these spaces are changing with the behavior and the movements of people. They reflect to some extent the human dynamics and indicate the fact that the space and its design determines our existence in a fundamental way.

[1] According to the phenomenology of Edmund Husserl and Merleau-Ponty, but same in the ‚experiential space‘ by Immanuel Kant, the space that we experience with our senses exists only in our consciousness. Only then we are able to experience the space and project our thoughts and memories into the space. In the experimental arrangement “Rooms” Jenny Brockmann assumes that we are creating an architectural and urban space, but at the same time the space has a retroactive effect on our perception and consequently on our movement and interaction.