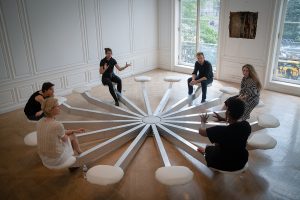 Jenny Brockmann: Dialogues on a Future Communication is a multidisciplinary and discursive exhibition interested in diverse knowledge bases, and the myriad ways they are bound together. For modern humans in the West, this is a time of unprecedented paradigm shifts. So many seek movement away from the rigid and out-moded methodologies and constructions of the world, the stories we tell about ourselves and the ways we are connected. In Dialogues on a Future Communication, sculptor Jenny Brockmann seeks to intervene in history, in the privileging and production of knowledge to upset the existing epistemologies. Her works are object lessons and visual models of the artistic research investigating architecture, critical theory, social evolution biology, and performance studies among other fields. She is interested in the ongoing pursuit of information; and through her interactive spatial arrangements, and conceptual sketches, Brockmann investigates dynamic social and spatial processes, and processes in nature, testing materials for possible use and exploring unfamiliar compounds and/or people who may have otherwise never been in conversation.

Formally, the artist’s architectural sculptures are a reflection of the Bauhaus principle that all parts of the material world can be integrated through the art and design. The works debuting in Dialogues on a Future Communication are reflective of a spatial articulation of the artist’s deep interdisciplinary study. Brockmann’s designs seek to be at once fragmented and capacious enough to hold space for all of the epistemological and ideological shifts she has encountered in working on the project, while also leaving space for viewers to share their knowledge. In this dialectical flow of information, the sculptures transform into new spaces that allow for the development of new structures of understandings. To bring these figurative spaces of understanding into being Brockmann built connections with over a dozen New York cultural practitioners from diverse analytical processes to create four entanglements, or procedural programs. The four entanglements each function separately as focal points for philosophical discourses that seek to question human behavioral patterns and socio-political structures. They each invoke the idea of the living laboratory expanded through their strongly performative character. Each event is an experiment but unlike the typical controlled environments in material science, these inquiries are unrepeatable, one-time events consisting of flexible variables. The first entanglement examines the idea of renewal and the relationship to physiology and the material world through lenses of care, healing and performance. The second is focused on resilience, and how to share insights while maintaining intellectual elasticity. Entanglement three reifies the connections between representation and settler colonialism and their impacts on architecture, art and imaginings of the future. The fourth program engages with the history of resistance and artmaking in Germany and its parallels in Trump’s America. These entanglements activate the sculptures to act as departure points for philosophical discourses that question human behavioral patterns and socio-political structures.

For Dialogues on a Future Communication, Brockmann crafted two new sculptures Seat #16 and Archive of a Future Memory.

Constructed of an aluminum alloy, Seat #16 is the physical embodiment of Brockmann’s investigations of human behavior patterns and desire to spark unforgettable and irreversible interactions. Seat #16 consists of 16 individual seats connected by eight intersecting beams that each support two seats. Each connected seat must be at equilibrium. If one side of the connected seat is unoccupied, the other will be completely imbalanced. Therefore, the occupants of the seat must communicate to sit and to stand. Once both seats are occupied, every shift of the body on one side, affects and is felt by the body sitting in the corresponding seat on the other. This equilibrium is not merely physical, but meant to engender an emotional, intellectual, and possibly existential connection for the time both parties are seated. Sitters are invited to consider and develop intimate knowledge of a stranger, perhaps in a way that they might never otherwise. Installed in the front room of the second floor space, sitting in the seat allows occupants to overlook and consider the Metropolitan Museum of Art, itself a repository of systems of knowledge from all over the globe.

The second sculpture, Archive of a Future Memory, is a sprawling structure also made of aluminum. Undulating, capacious and serpentine, the sculpture is inspired in part by the biblical creature Leviathan, Thomas Hobbes’ 1651 treatise on government Leviathan, and the double-helix, the molecular structure of nucleic acid that composes genetic coding in all organisms. The Leviathan, a figure described in the Talmud as a fearsome sea monster living “in the deep abyss” of the sea. The Book of Job noted that the creature possessed “eyelids of the dawn,” that gave it an illuminating power. The Hebrew roots of the word are believed to be lavah, meaning „to couple, connect, or join“, and thannin, meaning „a serpent or dragon;“ together this paints a picture of a fantastic and hulking yet swift sea-dwelling scaled serpent. Created during Genesis with all of the other beasts of the world, there were initially two leviathan – a male and female. Eventually, God struck down the female serpent in order to keep the creatures from reproducing and wreaking havoc on the Earth – this part of the parable is an area of particular interest for the artist. What makes the female leviathan more expendable than the male? Also, Brockmann surveyed depictions of the beast in art history and took inspiration from the forms used in the works. Considering that the project is akin to a living laboratory, the idea of originating outside of the Western scientific world is not an unorthodox idea to consider.

Hobbes’ Leviathan concerns the nature of governance and advocates for an all-powerful leader who is sanctioned to contain, control, and speak for the people of the nation. Similar to the biblical creature, this leviathan-like authority will be an encompassment of many in that this figure or governing body contains the people and their interests. It is a parallel to the moment we find ourselves in the geopolitical landscape.The double-helix is a reference to deoxyribonucleic acid rooted in biology. The molecule discovered by Rosalind Francis, James Watson and Francis Crick is composed of two chains that coil around each other to form a double helix structure that carries genetic instructions for the development, functioning, growth and reproduction of all organisms and many viruses. The discovery is often credited solely to Watson and Crick , but their work is partially based on the work of English female chemist Rosalind Frick. The discovery of the double helix changed the face of biology.

In Collaboration with: 1014 Inc., The Vera List Center for Art and Politics at The New School and Willms Neuhaus Foundation

A booklet is published in connection with the project Dialogues on Future Communication, published by Konnotation Press and includes material and texts gathered during the realization of the project.