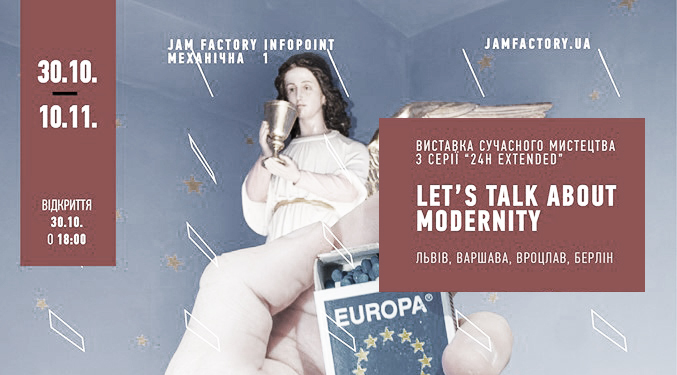 The exhibition Let’s Talk About Modernity – 24H Extended is the event from the series „24 H“. This series has started three years ago, in 2017 and until now has taken place in various cities such as: Warsaw, Wrocław, Gdańsk, Nürnberg, Lublin and Poznań.

The primary idea of the series concentrate on a short artistic action, which are organized in venues not necessary suited to present art. Many of them were in process before transition, another were just after it, starting a new chapter in their life.

In all the exhibitions the focus was put on going out from traditional and classical exhibition rooms: from museums or galleries, and confront the artworks with new surrounding, which often became an unusual background for the works, opening them for a new way of interpretation.

Another important aspect of all the 24H events was a connection between two cities: between this, in which the exhibition was organized and another, foreign one. Because of its international and vibrant art scene, Berlin has been chosen as a partner city. It was an opportunity for artists to show their works often for the first time in a totally new context of the city they didn’t know well and artists they have just met.

The artists invited come from Lviv but also from three other cities: Berlin, Warsaw and Wroclaw. Apart of the Lviv artists of course, for many others it will be the first time to show their work in this city and even first time in Ukraine.

The exhibition relates, as it has been already mentioned in the title – Let’s Talk About Modernity – to the Avantgarde and idea of Modernism in Europe, and its first beginning in the 20th century. The history of Lviv’s Avantgarde gives exhibition an interesting background and brings more attention to this part of the European story, which usually stays unmentioned.

All of the artists invited to the exhibition explore different aspects of the Modernist heritage. Taking it as a departure point and common background, their works represent different routes taken by different aspects of the modernist art – it’s subjects, language, modes of operating. The common heritage is also an occasion to reflect on contemporary conditions, as seen from different perspectives.

Works by Polish, Ukrainian and Berlin-based artists, presented in this project, are showing two main aspects of how we see ideas of Avantgarde and Modernism today. First reflects of how those ideas are taken and reinterpreted by young and middle generation of creators. In the exhibition two various positions will meet and get into an artistic dialogue. There are art works, which refer directly to the heritage, or to its myth. Others uses Modernism and Avantgarde as general conceptual approach and an attitude to see and interpret our reality.

The exhibition opening will take place on October, 30, at 6 PM, at the Jam Factory Infopoint (1, Mekhanichna Str., Lviv, Ukraine). It will include performance by Jos McKain (USA-Germany). Artists and curators will take part in the opening of the project and tell more about the conception of the project. Exposition includes installations and movies.

The exhibition will be available for the visitors from October, 30, till November, 10.
The curator’s excursion will take place on November, 2, at 4 PM.

The project is financed by the Ministry of Culture and National Heritage as part of the Multiannual Programme NIEPODLEGŁA 2017-2022 within the framework of the Adam Mickiewicz Institute subsidy programme “Cultural Bridges”.

With the financial support of the Harald Binder Culture Enterprises.