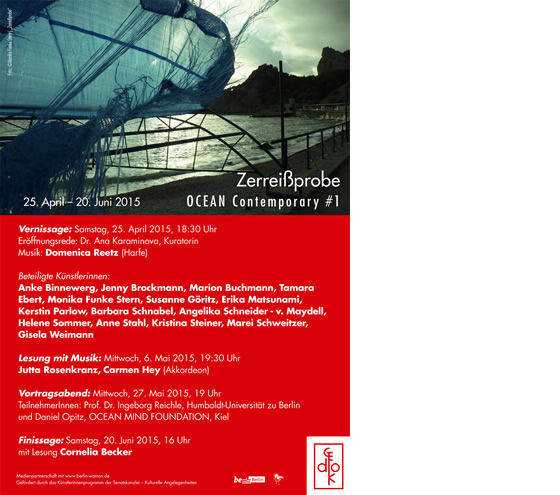 Out of the conviction that art is an important medium for communicating socially relevant issues, artists were invited to comment on the theme „The Ocean Today.“ The question arises as to why the world’s oceans and why today in particular?

Oceans play a central role in life on our planet. Therefore, the fact that they are highly endangered—and the global biological balance is as well—is frightening. Marine ecologists and oceanologists have been dealing with the problems of the oceans for decades and predict a climate change that we are already feeling even without scientific reports. The situation is precarious.
We wanted to address this problem with art, and sensitize the public to the subject. Through visual, aesthetic means, viewers should become aware of certain conditions in an emotional way and, without a moralizing undertone, be inspired to reflect on them.

The fact that water is life doesn’t need further explanation. With her sculptures from the series Aquafakte, artist Susanne Göritz draws attention to the diversity of life forms and their modifications in water. The ceramic sea creatures result from attentive observations of nature but also from the artist’s lively imagination. We encounter aquatic life forms without being sure how much of this beauty is due to artistic imagination and how much to nature.

An antithesis or perhaps even complement to Göritz’s works are the minimalist drawings and installation by Japanese artist Erika Matsunami. They do not stipulate fixed interpretations. And yet the red liquid evokes associations with the driving force of life: blood. Despite all the laws of gravity, this flow of life rises upwards, but evaporates over the course of the exhibition, thus signaling a threat. Together with the drawings and photographs that are not part of the show, this installation belongs to a major series of works titled B.O.D.Y.

From abstract art forms we move on to real stories, which have been assembled into an encyclopedia of the women of the seas by Marei Schweitzer. This series of hand-printed sheets in the old Neuruppin tradition visualizes the stories of women whose fates were connected to the sea. The handwritten wall text gives further information on the project.

Longings for the vastness of the sea, for adventures, but also for myths hidden by the unknown blue, is the theme of the documentary film No Man’s Land by Helene Sommer and the photograph Hinnerk by Kristina Steiner. In the quadriptych Wellenreiten [Surfing] by Angelika Schneider-v. Maydell, man and water form one single entity and glide in synchronized movement through the current.

A less harmonious relationship between man and water is represented in the video was wasser macht [what water does] by Chandana Hörmann and Marion Buchmann. The female figure reflected in the surface of the water seems to be torn apart, disturbed, almost destroyed by the fluid, which can be not only life-supporting but also a life-threatening force.

Tamara Ebert addresses the careless exploitation of the oceans and the fatal pollution of our most valuable natural resource in her drawings Mangelhafte Gewässerreinigung [Inadequate Water Purification] and Ungenügend funktionierender Meeresgrundreiniger [Inadequately Functioning Seabed Cleaner]. Where socio-political structures fail, art claims the right to draw attention to these failed attempts.

Jenny Brockmann’s installation Chronicle of a Place is part of a larger project that aims to trace the footsteps of German emigrants. The photographs and water samples on display come from the East River in New York City, whose currents brought death to about 1,500 people in 1904. Current news reports also shows that geopolitical waterways are not only gateways to a brighter future, but can also become places of disaster.

In her series of analog photographs Soul in Motion Kerstin Parlow reflects a feeling that to many of us is familiar: the need to move on, discover new horizons, be in search of something. This emotional state is most evident when the traveler uses waterways. In her temporary intervention Sunken Street, Anke Binnewerk emphasizes the dependence of our infrastructure, especially road construction, on nature and vice versa through a road marking in the riverbed. In this exhibition, the artist shows the photographic documentation of this intervention that took place in Dresden’s public space.

The title of Gisela Weimann’s triptych The Garbage and the Sea is reminiscent of Hemingway’s novella The Old Man and the Sea, except that the artist replaces or equates the man with garbage. Garbage is a remnant of the relationship between man and nature on the coasts. In this context, Barbara Schnabel’s large-format photograph Ocean Trash also refers to the 100 million tons of plastic waste that have accumulated in the oceans. The oversized plastic bottle that seems to lie on a beach will take about 450 years to decompose completely.

Anne Stahl has been dealing with the subject of water for a long time in various series of pictures and has presented it from different perspectives. Her two paintings Cadet and Mo’o kiha draw a cross-section of the earth’s surface to capture the waterways in two-dimensional, wondrous images of nature.

Finally and with special thanks and joy I would like to present the photographs of Monika Funke Stern. One of them is entitled Zerreißprobe [Tear Test], which we found so meaningful for our theme that it became the title of the whole exhibition. The pictures by Mrs. Funke Stern depict the Ukrainian side of the Black Sea, where the artist and filmmaker has her second home. The Crimean coast became the focal point of political conflicts precisely because of its strategic location on the water. The sea, once a symbol of freedom and free spirit, is now a place for military stations and peace-threatening power interests.