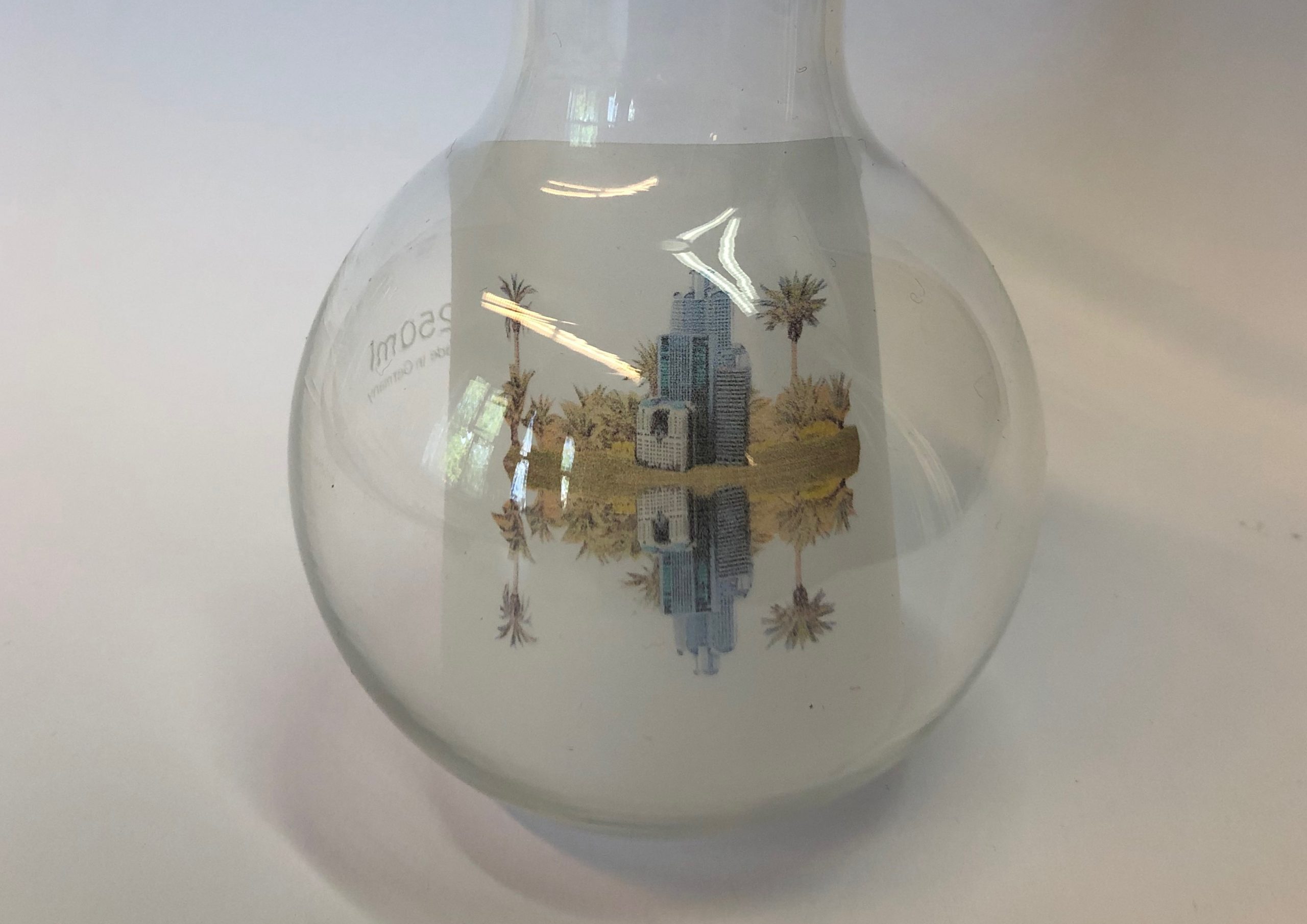 From dystopian sci-fi films to green technocapitalism, what trickles down from climate change research into popular culture are often dire visions of Earth’s future: a planet either devoid of life, or one saved by herculean human innovations. The recent proposed scientific designation of our present geological epoch as the Anthropocene, in which humans, or anthropos-, are driving the planet on a universal death track toward extinction, fuels these cultural imaginaries. However scientifically viable the Anthropocene model may be, such a monolithic framework offers little room for considering the nuances of human and non-human relationships. Feminist, decolonial, and indigenous scholars in particular, have taken this designation to task for its erasure and homogenizing of ways of living in the world that are inherently “environmentally friendly” or “sustainable.” While human activities indisputably over-extract from the earth, there are other stories to be told amid the ruins. The artists in Collaborative Survival mine various connections between human and plant lifeworlds, revealing social, political, economic, personal, and material histories in the process. Jenny Brockmann, Beatrice Glow, Tahir Karmali, Goldie Poblador, and Michael Wang explore the ways in which we are bound up in reciprocal and resilient relationships that determine our planetary fate.

This exhibition borrows its title from Anna Lowenhaupt Tsing’s book The Mushroom at the End of the World, which terms “collaborative survival” as the way “we change through our collaborations both within and across species.” Tsing’s writing challenges anthropocentric narratives that envision humans as the lone survivors or saviors of the cosmos. The works on view challenge the concept of “human” as distinct from and oppositional to “nature,” perpetuated as Western colonial distinctions that enable extractive capitalism and planetary degradation.These works appropriate existing methodologies — from the greenhouse and auction catalogue to patriarchal mythologies. Rather than outright rejection of such forms, these artists work through them in unexpected ways to reveal the widely-accepted assumptions each holds. This exhibition steers between apocalyptic apathy and neo-environmentalism (the belief that civilization and nature can only be saved by new technologies), anthropocentrism and ecocentrism, success and failure, hope and fear.

In her two-part work HyperAdaptation (2021) Jenny Brockmann (b. 1976, Berlin, Germany) collaborates with four researchers across different fields. Lynn Christenson, ecologist at Vassar College; Peter Groffman, biochemist at CUNY, Advanced Science Research Center; Lathan Hardy woodwind specialist and producer; and Lauhona Ganguly, media theorist at The New School. Together they address two questions in the face of current Anthropocene discourse: (1) How does resilience, adaptability and/or non-adaptability reveal itself within species, environments, and social interactions? (2) How might a programmed being refuse and emancipate itself from its surroundings — can AI pose resistance, or not? An accompanying public dialogue event in the gallery with these collaborators will center around the sculpture Archive of a Future Memory #2 — HyperAdaptation. Part two 2020-20-02 — HyperAdaptation is a wall-length chart that results from this improvisational discourse, visualizing such knowledge processes as comprehensible through shared terms and concepts. The project examines the constructed divisions of “nature” and “culture,” as well as the empirical bounds of scientific knowledge production, by creating an interdisciplinary space within the gallery.
Beatrice Glow (b. Bay Area, California) interrogates the visual languages of luxury and power derived through the exploitation of natural resources. Smoke Trails (2021) features the catalogue and virtual smoking room of a fictional private family collection of the near future, in which the mysterious quadrillionaire legacy named Empire of Smoke (EoS 10^15), has self-enriched through centuries investing in businesses related to airborne substances, from tobacco to gunpowder, and vape culture to bioweapons. Glow’s project also displays a range of 3D-printed fictional artifacts linked to the tobacco plant’s labor, mercantile, settler-colonial, and social history. According to the artist, “the planetary awareness vaguely imagined by white Western humans in fantasies about Spice Islands and global trade is now upon us…One finds oneself in a living world much more vast than that constituted by humans. Whose place is it anyway?” In 1847, Marx wrote “all that is solid melts into air” conjuring visions of smokestacks and steam engines of industrial revolution-era Europe. Smoke Trails pushes further on this idea of the solidification as well as dissolution of capital as accumulated through injustice. Glow’s project scrutinizes wealth provenance in order to expose which humans have been primarily responsible for extractivism’s planetary effects, facilitated through the simultaneous objectification and abstraction of those deemed “lesser human,” “nonhuman,” and “nature.”

Tahir Karmali’s (b. 1987, Nairobi, Kenya) series Paradise (2019) de-neutralizes canvas as the raw material that backgrounds the Western art historical canon. With a focus on fair-trade sourcing from communities that cultivate and create self-sustainably, the artist’s methodical approach interweaves vernacular, material histories with labor and industry. In this series, the artist collaborated with textile specialist Jessi Highet to formulate natural dip dyes and to source Fair Trade cotton canvas. For the screen-printing, he worked locally in New York with master printer Luther Davis to generate the least waste possible, leaving little room for error. These prints on canvas render photographs of the artist’s family in their home country Seychelles, and are inspired by the hadith: i.e. “paradise is at the feet of the mother.” — Prophet Muhammad ﷺ. For Karmali, each deceptively idyllic landscape conceals frustration and longing for a homeland fighting imminent climate change. It was while looking at these photographs that he began researching the implications of art in what are often fraught circuits of production. The artist’s conceptual practice engages the possibilities and limits of artistic circulation as well as individual responsibility in a globally interlinked economy.

Goldie Poblador (b. 1987, Manila, Philippines) explores the origins and mythologies behind the Dama de Noche and Peacock flowers, both native to the artist’s home country, the Philippines. Poblador’s multimedium, eco-feminist approach addresses how flowers are taken from their countries of origin and are appropriated through trade. In the tale of the Dama de Noche, the queen is unable to produce an heir and is then turned into a flower. The Peacock flower was also used by West Indian women under colonialism as an abortifacient in order to not bear children into slavery. Poblador’s olfactory installation, entitled Fertility Flowers (2021), transports audiences into miniature worlds rendered through glass, fragrance, performance, and film. The creation of a short film unmasks these narratives around both flowers and their uses, exposing entangled ecologies of colonialism, patriarchy, and the social oppression of women as child-bearers. Poblador’s shapeshifting reimagination attempts to decolonize these histories in which female bodies become flowers as punishment.

Michael Wang (b. 1981, Olney, NY) constructs a greenhouse for Brugmansia versicolor plants, displayed within a life-support system tailored to the organism’s unique needs. Officially designated “extinct in the wild,” the many flora or fauna of this continuous series by Wang are known only in association with humans. The species Brugmansia versicolor has endured for thousands of years solely through traditional cultivation in the Andean lowlands of Ecuador, and later as an ornamental plant after the species was exported from Ecuador to Naples in 1893. The plant has been valued for its psychoactive properties, medicinal and ritual uses: their leaves are combined with water and consumed to induce visions that may last several days. In collaboration with local horticulturalists, Wang researches species across national borders and cosmologies. Exhibition staff are trained to tend to the plants in their new art contexts. Acoma Pueblo poet Simon Ortiz wrote of the wilderness that is modern cities, where people are alienated from both themselves and others. Extinct in the Wild (Brugmansia versicolor) expands upon this relationship, where plants “extinct in the wild” are displaced in the urban wilderness for display. The greenhouse, principally a modernist structure of displacement, is adapted as a strategy for survival at the cusp of species extinction. Wang’s work further questions notions of “wilderness,” why some species are designated resources for conservation, and what transpires through the glass interface.

With all of its data-driven urgency that trickles down into mainstream notions of climate change, the Anthropocene must make room for more than the crisis of hope emanating from a distant future. These times of global pandemic have further made clear not only the necessity of human-to-human interdependencies when pitted against a nonhuman agent, but also how viruses are spread through human ecological encroachment and the displacement of other species from their homes. Recent studies have also shown how marine organisms have long absorbed a majority of the virosphere. Such simultaneous narratives tell looping stories of survival, in which biodiversity and human interdependence on the nonhuman allow for the continuation of life. Collaborative Survival calls attention to the ways in which we are implicated in webs of lively and messy interrelations. Drawing upon new research, stories, and time-honored knowledge, the artists in this exhibition encourage a shift in our collective imagination from total extinction toward praxes that make way for multidirectional futures.