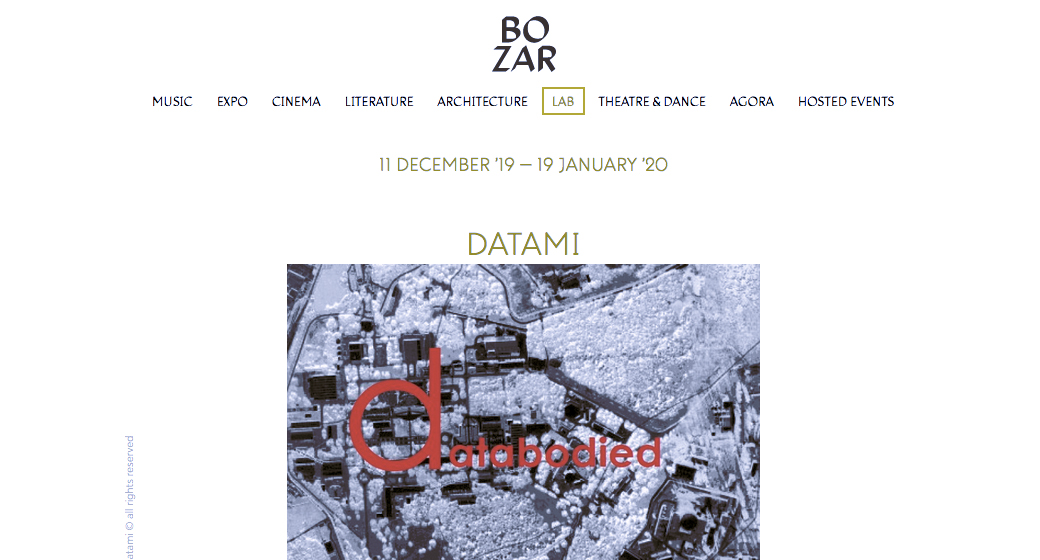 DATAMI
The Joint Research Centre of the European Commission and Bozar proudly present Datami. Datami is an exhibition of 24 artworks created by selected artists in close collaboration with scientists and policymakers. The datami is a ‚data tatami‘: a place of concentration, of rest and repose against the digital onslaught, a unit of measurement of digital freedom. It helps you reflect on the coming digital transformation triggered by Big Data and AI, and to define a new digital self with all the freedoms of democracy.Who owns our data? Is there freedom in our new digital lives? Do we need to fear the coming transformation? Datami is an invitation to think along with the artists, scientists and citizens and explore this new unknown of Big Data and AI. Let’s own this transformation, and build this new future together

In real time, the installation SciArt Experiment transfers data generated by an experiment at JRC dealing with climate change consequences, to a spatial installation in the shape of a spiral, at the exhibition site VELA9 and BOZAR. A structure corresponding to the test structure at the ELSA lab of JRC is built at a remote site, and put under increasing stress throughout the duration of the exhibition. The structure at JRC becomes more and more strained under the deforming pressure of hydraulic devices used at ELSA for simulating geological movements and states of the atmosphere. At a certain point in time, the structure will have become permanently disfigured. During this process, the spatial installation at the exhibition site is connected in real time with the data of the experiment, and transforms in time according to data (created by the smart energy of the deforming structure). Specific factors in the exhibition hall (deliberate or not, e.g. how people move through the space, or physical data like temperature and pressure) lead to the creation of certain variables in the experiment. These add a random element to the overall uncertainty of the project, while creating an integrated communication, opening a social channel of interaction between the observers and the element under test (e.g. a reference to the people’s belief on the rate of climate change).

The uncertainty provides contrast to the expected evolution of the experiment. Influenced by previous data, experiments, or models, anticipation arises regarding the duration of the experiment and the moment when the structure becomes irreversibly deformed. This additional variable evolves throughout the experiment. The life expectancy of the experiment is updated continuously, according to measurements and updates of knowledge. This enhances the dichotomy between what we know about the ongoing phenomena, and the anticipation of what might happen, while affecting our „memory“: our understanding of what has happened up until that moment.