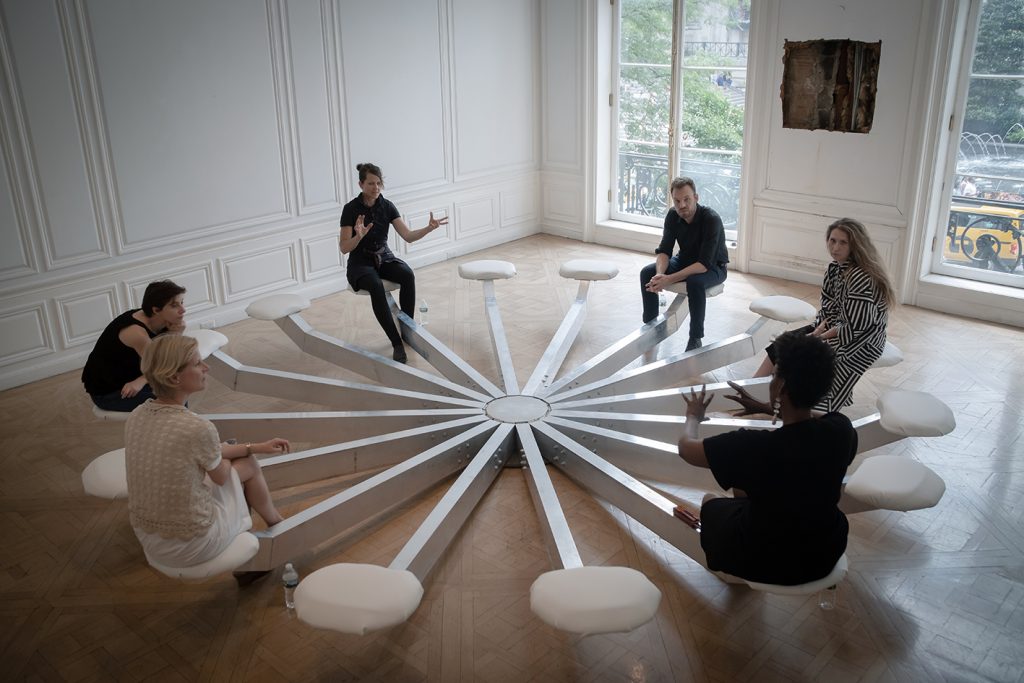 On Tuesday, September 17,  Berlin-based sculptor Jenny Brockmann will debut her latest multidisciplinary and discursive exhibition Dialogues on a Future Communication to New York at 1014, a new cross-disciplinary forum in Manhattan. The product of several years of collaborative exchange and research in topics as varied as resilience, critical race theory, social evolution biology, urban planning, Dialogues on A Future Communication is interested in diverse knowledge bases, histories and how seemingly unrelated knowledge may be critically interwoven.

Curated by Niama Safia Sandy, the exhibition revolves around the activation of Brockmann’s sculptures through the cultivation of experiences and conversations to share knowledge, create change and true integration of varied perspectives shaped in dialogue and partnership with New York’s brightest artists, theoreticians, and cultural workers.

The opening reception will be held on Tuesday, September 17 from 6.30 p.m., guests may reserve a place here. The exhibition will conclude on Friday, October 4, 2019. 1014 is open by appointment only, and is located at 1014 Fifth Avenue (between 82nd and 83rd street).

Formally, Brockmann’s architectural sculptures are a reflection of the Bauhaus principle that all parts of the material world can be integrated through the art and design. The sculptures debuting in Dialogues on a Future Communication are reflective of an articulation of the artist’s ongoing deep interdisciplinary studies. Brockmann’s designs seek to be capacious enough to hold space for all of the epistemological and ideological shifts she had traversed in her time working on the project and to leave space for viewers to share their knowledge. Brockmann has developed four entanglements, or procedural programs, created in partnership with invited speakers and performers from differing backgrounds and analytical processes. These entanglements will activate the sculptures to act as departure points for philosophical discourses that question human behavioral patterns and socio-political structures.

Entanglement #1: Care, focuses on the physical and energetic/metaphysical care of the embodied self, and the possibility that direct action in support of them is not the singular cognitive province of the human species.

Entanglement #3: Violence, seeks to operationalize the epistemologies of the location in which we have gathered by sifting through its place in the ecological, architectural, and cultural milieu of New York City, the United States and beyond. with architect Mario Gooden, art historian Danielle Wu, biologist Luciana Solano, historian Alexander Manewitz and writer and curator Niama Sandy, October 1, 7-9 p.m., register here

Entanglement #4: Refusal And Emancipation is an exploration of the legacy of George Grosz. As Naziism took hold in 1930s Germany, Grosz stood against fascism with his drawings and paintings. Discussants with art historian Birgit Möckel, artist Beldan Sezen and more, October 3, 7-9 p.m., register here

Jenny Brockmann: ‘Dialogues of a Future Communication’  is commissioned by 1014 and funded by Berlin Senate Department for Culture and Europe and by Willms Neuhaus Foundation, Berlin. ‘Entanglement#2’ has been developed as a collaboration with the Vera List Center for Art and Politics at The New School.