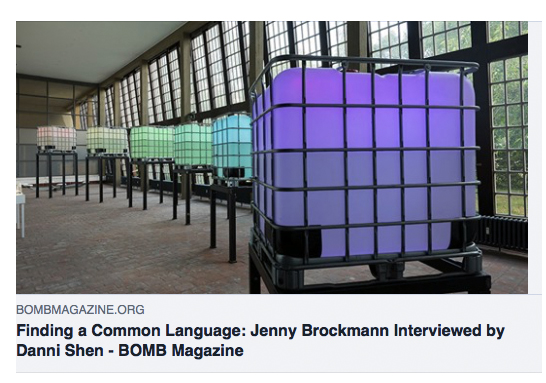 In a decades-long collaborative and research-based practice, Berlin- and New York-based artist Jenny Brockmann searches for the socio-political significance of what she terms the “irreversible moment,” namely, when and how do irreversible social, ecological, and economical turning points occur? This continuous project emerges from a lecture-performance between experts from various fields—physicians, sociologists, synthetic-life designers, particle physicists, philosophers, media theorists, IT experts, philosophers, architects, dancers, and musicians—while actively engaging the public in the scientific process. Through her work, the artist complicates the reductive nature of digital code, Western scientific methods, and the very notion of interdisciplinarity. For Brockmann, art has the potential to bridge different fields, social groups, and human and non-human worlds via entanglements with various modes of knowledge production. —Danni Shen

Danni Shen: Your artistic practice addresses the process of how researchers collect data and how they then transform it into scientific knowledge. If the theorized negligence for the environment is also symptomatic of an impoverished imagination, how can the artist further create and complicate conditions for that dissemination?

Jenny Brockmann: I think “impoverished imagination” describes a phenomenon of our time well. I think this is something that occurs when there is no emphasis on the bodily experience. I have been researching this topic for the past twenty years: How can we create or acquire knowledge through our bodily experiences evolving in time? My practice is always connected to an exchange with the public and does not reveal itself without the public. Natural science does not include the public in the first place, so by bringing those different perspectives together, I simultaneously invite the broader audience to take part in the process of learning together. Anthropologist Bruno Latour describes the process of (scientific) knowledge production as a discontinuous process that happens through reducing reality by creating discrete numbers in the first place, amplifying it, and then adding it to our knowledge system. My work is then to put an emphasis on the continuity of the physical experience while critically discussing the process of knowledge production. I like the expression of “complicating” things, because the reduction of reality through the 0 and 1 of digital code can be reextended through interaction in the material world. A second aspect is that as a nonexpert, I create a certain productive confusion in which I shift and combine fields that usually wouldn’t intersect. The process relates to the dislocation of material and data, and refers to the crucial fact that, in our present time, objects and things are constantly removed from their original locations to be transferred to different ones, as described by Michel Foucault in “Of Other Spaces: Utopias and Heterotopias” (1967).

DS: What has been your experience in working via inter- or trans-disciplinary collaboration with other fields?

JB: The main challenge, but also the potential of working in a so-called interdisciplinary or transdisciplinary way, is the need to find a common language. Even in similar fields of science, communication about the research topic can be a demanding task, as every field requires its own specific language. This communication process facilitates a way of learning together and learning about communication itself in a way that is accessible. For me, this is the relevant point regarding interdisciplinarity or collaborating with experts across fields.

DS: I’m curious to hear your thoughts, then, about the term “interdisciplinary.”

JB: I try not to use that word because it does not describe my practice. I would say it is more of an entanglement, reassembling, shifting, creating feedback, or even paradox. Altering “reality” or “truth” is very intriguing to me as an artist because I have the freedom to bring in other elements. I want to achieve the in-between, because then we really have to struggle. Only when we struggle do we get somewhere.

DS: Usually there is a question for art of: Can one touch? For you, it seems that the question is rather: What is science that art can touch?

JB: My work is all about that, and also about the question of what is in between—how it relates to society in a way of including considerations of social, gender, racial, and environmental justice. For the Of Colour and Light (2018) project with scientists from the Leibniz Institute of Freshwater Ecology and Inland Fisheries and the Free University of Berlin at the Kleine Orangerie Schloss Charlottenburg, we brought into discussion the topic of light pollution. I liked this connection to the space as a place where research has taken place since the seventeenth century. I positioned containers as a second architecture on different levels in a path of consecutive colors. Each container held stream water from the Spree River, and over the course of two months, the organisms in the water (algae and amoeba—there was a lot of microplastic inside as well) developed in ways depending on the color of light that they were exposed to day and night. Christopher Kyba, the physicist I collaborated with, and who interprets satellite pictures, stated that there is almost no place on Earth which is not illuminated at night. Although this has a direct impact on flora and other fauna, human beings are dealing with this in a very unconscious way. In this project, I wanted to reflect on the kind of light we actually want to have. How bright do we want it to be? In the last of my two lecture-performances, he explained that we are physically losing the ability to see at night because we are not used to it. We are thus losing some of our corporeal abilities.

DS: That also makes me think about the ways in which we are being altered by digital infrastructures.

JB: The idea of prosthesis or the extension of the body—the aim of science and innovation—is defined by a perpetual cycle of losing abilities and gaining new ones. If this prosthesis, like digital bits and data, is not clearly visible to us, our interpretation gets distorted. Philosopher Yuk Hui describes plainly how materiality is related to time. A digital object that vanishes has a very short time span; but on the other side, for example, a piece of metal will always exist on this earth. This is something to consider, because we as humans are connected to the material world and the passing of time. The digital object and communication differ from us, but at the same time we incorporate them as part of us, as a product of our thoughts that shapes our way of thinking. The transformation of reality into data, as well as language itself, can be seen as a prosthesis that has a different connotation if it reveals itself in a visible way (prosthesis out of material) or in an invisible way (digital objects). My projects always include prosthetical tools. In the past years I have also included tables where the audience can be part of the scientific process in detail, because the process is not digital in any way. (Though theoretical numbers rely on a scientific process using digital media in big numbers.) I capture the process by working on these very subjective cartographies of thought, reflecting interconnections through my own system of thinking and bringing together definitions that I find during our discussions in each discipline. For example, the project Irreversible Moment (2016) was about a structural change in time, where you have a structure in the moment before and a different one afterward, and you can’t turn it back. I really wanted to define this very moment, like when there is no one defined moment when death comes. There are so many things that cannot be described.

DS: What systems of knowledge production are you interested in?

JB: All of the scientists I meet these days are speaking of a crisis of the sciences in terms of viability. I think that this might be a result of a dichotomy between the way scientifically grounded observations are made and how they are economically exploited. Fred Moten, professor at New York University, writer, and poet, sent me a song by a Papua New Guinea Kaluli woman who sings about a creek, for the creek, and with the creek. This is also knowledge production. It’s an entanglement with nature, not observing the otherness of nature that is in Western scientific production.

DS: Has your process involved reaching out to researchers with a specific idea in mind, or is it more organic?

JB: My first studio in Berlin was next to a large physics research facility, so my process really started out of that. I just went in and asked about magnetic fields, and a dialogue started and just didn’t stop. It’s very organic. I do approach scientists with my artistic process and research on the essence of change, so I am always looking for new people to work with, but it’s all from one to another. I have to say, every collaboration is ultimately based on friendship, on liking one another—otherwise, you can’t go on.

Jenny Brockmann’s work can be seen in the group exhibition Eco-Shifters at La Fabbrica del Cioccolato in Torre-Blenio, Switzerland, until May 26.

Danni Shen is an independent curator and writer. Most recently, she was the Curatorial Associate at SPRING/BREAK Art Show LA and NY and more previously at Empty Gallery, a black-cube space dedicated to time-based, non-object-oriented, interdisciplinary practices physically located in Hong Kong. She is based in New York, where she was also the Curatorial Fellow at Wave Hill and Curator-in-Residence at Residency Unlimited. She is a contributor to various publications including Hyperallergic, Rhizome, SCREEN界面, and has written catalogue essays for artists Jillian Mayer, Wonjung Choi, and Rina Banerjee, among others.